Intent-based networking is an emerging approach to automating network management and policy enforcement.

IBNS, as it is known, is software that helps administrators plan, design, implement and operate networks in a way that improves availability and agility. Gartner describes IBNS as lifecycle management software for networking infrastructure. Veriflow, an early player in the market, claims it will take the network from “fragile to agile”.

Those improvements are essential as businesses drive digital transformation. The essence of IBNS is that it takes business outcomes the intent – and constantly manages the network to achieve the outcomes.

The system takes a business policy as its input, converts the requirement to a network configuration and generates a network design. A simple analogy is entering a destination into a GPS satellite navigation (sat nav) system. IBNS also validates that the network can deliver the intended outcome.

IBNS implements the configuration across existing network infrastructure using its network automation or orchestration capabilities. For example, the system can configure firewalls and other devices to achieve the intended level of security.

The software continuously monitors network status to ensure it is meeting the business intent. It collects network data such as traffic logs to assess the state of the network and determine the optimum route.

If necessary, IBNS can take action to dynamically enforce the intent in real time by rerouting traffic, blocking other types of traffic or modifying capacity, for example. Using the sat nav analogy, IBNS can reroute traffic to avoid jams or other obstacles that could disrupt the journey.

In some IBNS solutions, the technology works closely with software-defined networking (SDN) technologies to translate IBNS commands into infrastructure commands and actions. Other vendors believe SDN is not essential to the deployment of IBNS. Their solutions claim to have the capability to control the network infrastructure.

Although there are differences in approach, standards bodies such as the Northbound Working Group in the Open Networking Foundation, are working to standardize protocols and interfaces for the technology.

While IBNS is what Gartner describes as a nascent technology, there is general agreement on its potential benefits.

For a start, it enables networks to meet changing traffic demands. While current networks were designed to carry voice, data, video and Internet traffic, administrators now have to support mobile, cloud and IoT applications. More devices are attached to the network, data volumes are much higher and security threats are greater.

IBNS can scale to meet those demands in an intelligent way. It eliminates the guesswork required and provides mathematically-based designs and optimization processes. The software has self-learning capabilities so that it can constantly adapt to changing business demands, network conditions and security threats.

IBNS technology is vendor-agnostic so that applications originally designed for a specific environment can be ported to other environments without modification to the app. The system can eliminate network conflicts that occur between multiple applications with different requirements. IBNS resolves the conflicts based on intent and business rules, automating application prioritization.

The Next Big Thing?

Although the system is in an early stage with a small number of players, Gartner suggests that IBNS could be “the next big thing” in networking and infrastructure and operations professionals should start considering how to implement it.

If you would like to know more about our services, please check out the articles and infographics on our website.

Posted in Blogs, Infra Structure Assessment Blogs
← How to Assess the Results of a Cloud MigrationGet Greater Control over Your Networks → 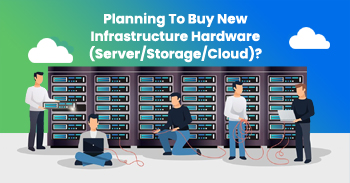